Is clay soil frustrating your attempts to grow a healthy lawn and garden?

Improve Your Clay Soil and Bring it Back to Life Today

If dense, dry dirt is giving you fits, don’t give up, you can actually improve clay soil.  You can have clay soil and still have the lawn and garden of your dreams. In fact, did you know that clay soil can actually be better than top soil because of its ability to hold nutrients?

With ClayMend you can easily and effectively unlock that potential.  ClayMend can improve your clay soil by improving the environment of the soil.  As a result this can lead to an increase in true organic activity.  Soil pH can improve due to this activity and it works in improving the flow of air and water.  Furthermore, as a result of these improvements the clay soil can encourage more robust root growth.

Take Me to the ClayMend Products Page

The problems with clay soil are caused by its physical makeup and its nutrient composition. It makes it quite difficult to improve clay soil. So what causes it to become dense?

What problems are caused by clay soil?

Clay soil particles can hold nutrients (unlike sand and silt). Unfortunately the dense structure of clay soil can restrict nutrients from getting in the soil or lock up nutrients that are in the soil. Here are other results:

Are you tired of lugging heavy bags of gypsum or other heavy materials to fix your clay soil?

Traditionally bulk materials such as gypsum or lime are lugged in to amend clay soil. See our page How ClayMend Works to learn how ClayMend is a smarter solution that is much easier to use.

How can I soften my clay soil?

Understandably, homeowners often like to try do-it-yourself methods first. There are so many products and so much conflicting information online that can make you overwhelmed and confused. How do you sort the fact from fiction? There are some things you can do that may have short-term results. Here’s a quick rundown of some things you can try:

ClayMend addresses almost all of the issues of hard clay soil by improving the soil environment, introducing beneficial soil microbes and supplying them with nutrients.  The proprietary blend of organic acids in ClayMend start the process by gathering the ultra-fine clay particles together and the microbes work to secure them together.  This process opens the soil allowing it to breath and as it opens the beneficial microbial activity increases and plant roots are able to establish themselves in the restructured soil. Many of these improvements by the organic activity become permanent unless something harmful to the soil such as salt is introduced.

Nutrients that have been locked away become free to be attached to the organic material and the clay structures for easy access by the plant roots.  Repeat use of ClayMend helps the microbial activity to work deeper in the soil for further improvement.  An active soil can maintain a superior soil structure for a much longer period of time than the temporary soil improvements from other amendments. 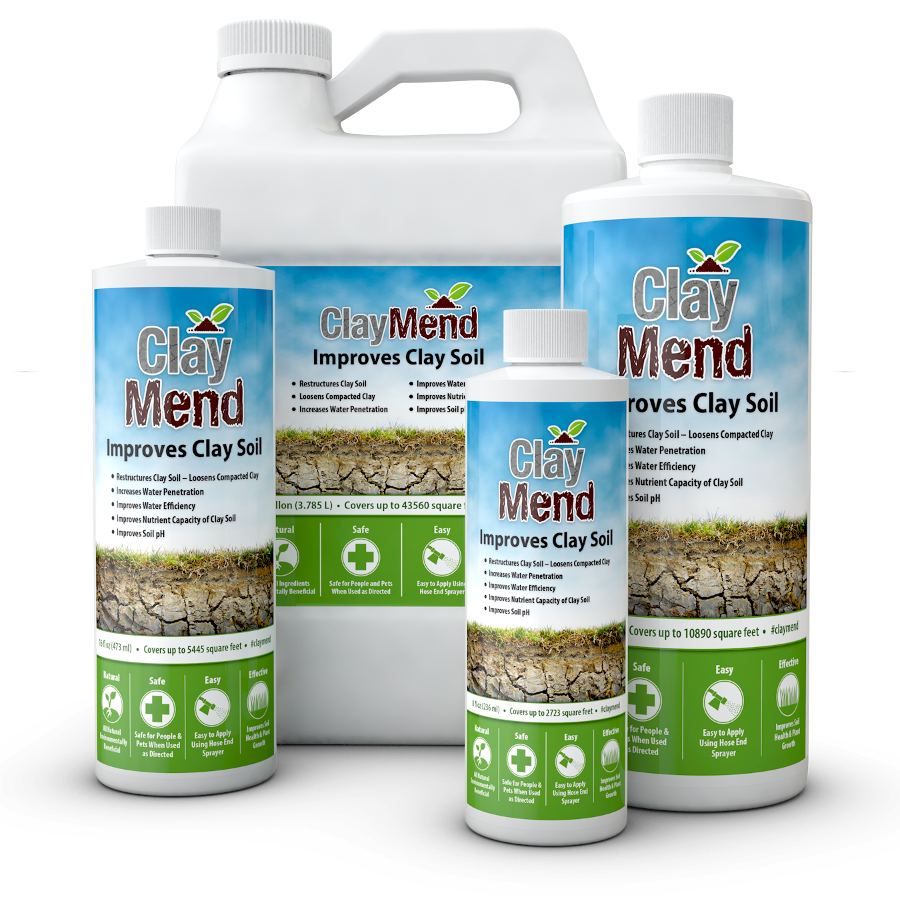 ClayMend is a Soil Amendment that

Gets to the Root of the Problem

It works to change and improve the structure of clay soil and to improve its ability to create and store nutrients.

A better solution is ClayMend that will work to improve clay soil in many areas.

As a liquid soil amendment it is easy to apply to lawns, shrubs, trees, flowers or vegetables.  It is able to get into soils where traditional amendments for clay soil are impractical. ClayMend can be applied to these areas and then rinsed off of the vegetation.  It is not harmful to the vegetation.  However, it needs to get down into the soil.  That is where it will work to improve clay soil and ultimately where improvements to lawns and plants occur.

ClayMend will help improve clay soil by improving many aspects of the soil, preparing it for a spectacular lawn and garden.

Space applications at 4 to 6 weeks apart.

Bring life to your soil today with ClayMend

We stand behind our products

We have an A+ Rating with the BBB

Endorsed by a reliable source, our customers

Start to Improve Clay Soil in Your Yard Today with ClayMend

Are you ready to start with ClayMend?

See What Our Satisfied Customers Have to Say!

At HumicGreen our top priority is the satisfaction of our customers. We strive to provide the highest quality lawn and garden products available.
Don’t take our word for it. See what our customers say.

This is an amazing product!

I used your ClayMend product again and let me tell you how impressed I am! This is an amazing product!

Unfortunately, I had my English Laurel bush trimmed by a very inexperienced person. It was in such bad shape I thought it would have to be removed. I was upset, as it had been there a number of years and would leave a large bare spot at my front door.  At my Neighbors suggestion, I applied ClayMend and Humic Granules around “Winston” as I call him; and it worked wonders. He is almost as good as new.  P.S. The Nasturtiums around the base outdid themselves!

I live in Las Vegas and was having a hard time getting my grass to look healthy. We have a lot of clay in our soil and my grass was having a very hard time growing. In spots it looked blotchy and sparce. I tried different products and nothing seemed to help. My son recommended Claymend. I could not believe the difference! It is now healthy and beautiful. I even had some professional lawn care workers come over to my house to ask me what I was using on my grass! Thank you for making such an excellent product! I recommend it to all my friends.

Best my lawn has ever looked!

I used claymend on my lawn this spring and I will say this is the best my lawn has ever looked through out the hot summer months we have in Nevada. It stayed bright green even in July and August.  My neighbors all ask what i use on my lawn as it is they best lawn they have seen. It really works.

Very Happy With the Results!

My neighbor treated my damaged dying lawn with ClayMend, HumicGranules, BioBuilder and GreenZyme. It came back much sooner than expected and seems to need less watering. I’m very happy with the results.

I have used the product for about a year. Sometimes when I’m out mowing my lawn, people driving down my street will stop and tell me I have the best looking lawn in the neighborhood. The neighbor’s milkman and his young son even knocked on my door one day because his son noticed there we’re no brown spots on my lawn and wondered what my secret was. Thanks Humic Green!

Give Us a Call

Send Us an E-mail

Learn More About
How ClayMend Works

Read Testimonials
from Others
Who Use ClayMend

Learn More About
Using ClayMend on
Your Lawn and Garden

Start building an army of microscopic organisms in your soil that will start working for you today.